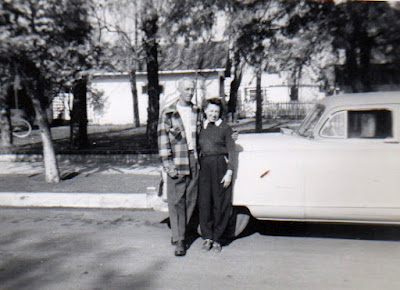 Jennifer Getz moved to the homestead at 5303 Hermitage Avenue about 20 years ago and her elderly landlady Jean immediately put her to work in the gardens. She soon had Jennifer doing maintenance and hired her on as property manager. A close friendship developed between the two based on their mutual love of caring for the property. Jean told Jennifer how she and her husband had begun building their house on the site in the 1930’s. They liked community so they built a duplex and a guest house as well. Jean dedicated an entire section of her home as a women's sewing center so the ladies of the neighborhood could gather together and sew while the children ran around and played. At one point they even had a day care. The house as Jean built it was a neighborhood destination. Jean raised her two children Clint and Sydney at the house and lived their until she was 95 years old. Her son found her a place to live near him and Jennifer continued on as property manager, regularly visiting with Jean to report on her beloved property what flowers were in bloom and if the  mature camphor trees in the front needed trimming.

Jean died shortly after her one hundredth birthday.  Jean never did agreements, contracts, or leases of any kind. Everything was on a handshake. But son Clint legally gave Jennifer the right of first refusal if the property was ever to be sold. Jennifer and Jean's children  had a warm relationship. Jeans son Clint helped Jennifer work on the property and Jennifer in turn found alternative revenue streams for the two siblings by renting the property to location scouts for movies and tv. By this time Jennifer had found her niche in the burgeoning Urban Farming community and had started a non-profit called SomethingBigger.org dedicated to working with children to ignite compassion for animals and the environment in the city. Her particular interest was teaching kids about the importance of our urban environment; providing hands on education for kids to learn about bees, making honey, backyard chickens & the importance of how even kids can help play a role in environmental conservation & preservation.

Life was good for the residents and the owners  at Jean’s Homestead at 5303 Hermitage Ave. But then Clint died suddenly and a grandchild Jennifer had never met- Eric S. Edwards- appeared fresh out of law school and eager to profit from his grandmother's property even though he had no legal grounds to do so. He made a deal to sell Jean's Homestead to a luxury small lot development company called Urban Blox. Suddenly, Jennifer was faced with eviction along with many long term renting families who lived on the block. The prospect of seeing Jean's lifetime of work bulldozed so that a small group- the developers and the grandson- could make a huge profit spurred Jennifer to action. The grandson started intimidation tactics to try to get the tenants out. Urban Blox brought in high powered attorneys from Sklar Kirsh  who also happen to be representing a handful of other developers with demolition plans for the neighborhood. Her legal right of first refusal was treated as if it did not exist. Security cameras Jennifer installed to protect Jean's Homestead now serve an entirely new purpose, to protect the tenants from Urban Blox.

Jennifer is a very smart lady. She quickly learned everything she could about the laws and felt she had a strong case. She tried to get the homestead made into a cultural landmark;  a process actually started with Jean before her death. This is one of the few ways of saving homes from demolition in LA. But  the legal team from Urban Blox shot down the application.  She then treid to get just the trees designated being the oldest & largest last remaining Camphors in the area.  Again, the developers & their attorneys got there way by one vote.

Jennifer then tried to appeal to the Department of City Planning (DCP) and senior planner Jose Romero-Navarro when Urban Blox decided to apply for permission to demolish Jean’s homestead even though they do not own it.  But Navarro decided to allow the hearing to take place despite widespread community opposition. Legions of letters have been submitted to the city citing the development's failure to comply with dozens of state & city codes. The proposed development  includes the wholesale destruction of Jean’s homestead, a neighboring mid-sized apartment building, a single family house - all rent stabilized with long term tenants, and the demolition of over 3 dozen trees- to build the luxury small lot development. None of the current residents can afford the proposed units. Many would not choose to live in them if they could.

The fate of Jean’s Homestead hangs in the balance as the Planning and Land Use Committee is currently reviewing the community appeal.


UPDATE!!
To voice your concerns about this project contact the Plum Committee members and land use staff:

MAKE SURE TO CC: Sharon.Dickinson@lacity.org


CUT AND PASTE THE TEXT IN RED INTO A NEW EMAIL

I am emailing you to urge the councilmember to Save Hermitage and Uphold the appeal for Case Number VTT 73704-SL and ENV-2015-2618-MND scheduled for the Planning and Land Use Meeting on October 25, 2016.

We need you to stand up to Greedy Developers who bully and harass tenants, destroy our architectural legacy and demolish the last of our rent stabilized homes.